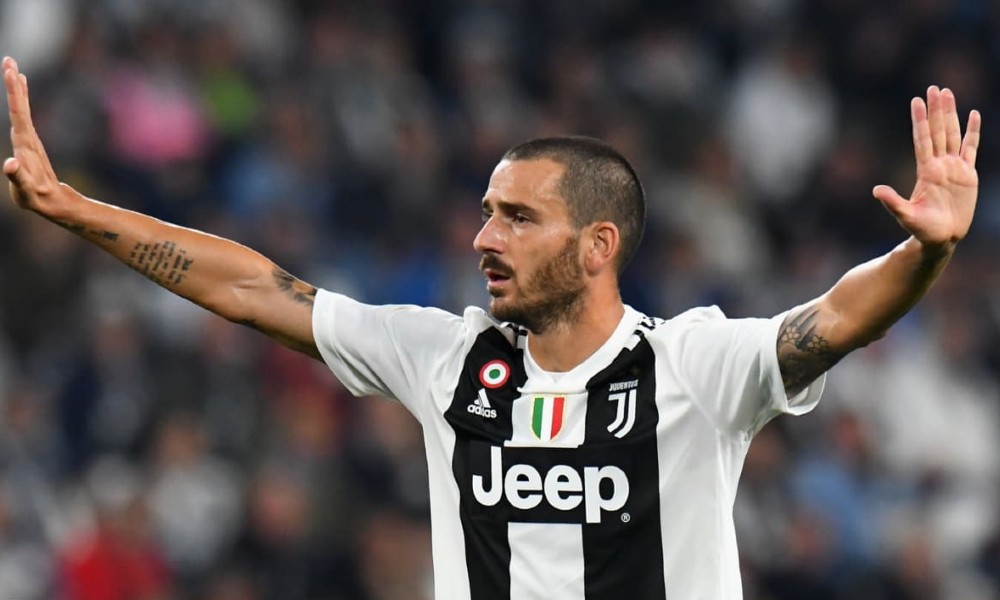 Leonardo Bonucci is one of the top names in the Italian Seria A. This all-around defensive veteran has an extensive collection of trophies throughout his ever-growing professional football career.

In this article, we will look into Leonardo Bonucci’s net worth and the personal life of this modern-day legend.

He is mainly known for his solid defensive technique and ability to split an opponent apart with his long ball passes. The big Italian centre-back who plays for Juventus and the Italian national side. He is the modern-day GOAT in the Seria A and today’s football generation from his contribution to Italian football.

In 2016, Bonucci earned the prestigious honour of Serie A footballer of the year. And many other club titles and personal accolades throughout his career.

Bonucci made his professional debut at Viterbese between 2004 and 2005. Then moved to Internazionale in 2005, where he spent two seasons on loan at Treviso and Pisa before moving to Bari in 2009.

In 2010, during his time at Juventus, he became an essential member of the team’s 3-man defensive line alongside Giorgio Chiellini and Andrea Barzagli. Becoming one of the best defence in football, helping Juventus win six Serie A titles in a row from 2012 and 2017.

Leonardo earned the Italian Player Of The Year in 2016 for his contribution that season with Juventus. An award that a defensive player rarely receives or is regularly overlooked. Despite missing two months of the season due to a severe hamstring injury.

In 2017, Bonucci moved to AC Milan on a five-year contract for €42 million. That same year he entered into the top three best defensive players of the 2017 Champions League. Thereafter, becoming the Milan team captain. However, Milan’s 2017/18 season didn’t go as well as he hoped for himself and the club, which created some media attention around his performance.

After just one season at Milan, Bonucci returned to Juventus as a trade deal with Mattia Caldara, who was worth €35 million at the time. Furthermore, Bonucci signed a five-year contract that would see him at Juventus till 2023. Since his return to Turin, he has contributed to the Seria A title’s side win two more times, the Italian Super Cup and Italian Cup win.

He made his career debut in 2010 and represented Italy at the FIFA World Cup in the same year and the following 2014 World Cup competition.

Bonucci’s main highlights for the Azzurri is getting to the Euro 2012 final and recently winning the Euro 2021 competition, beating England on penalties at Wembley Stadium.

Bonucci has 109 caps for his national team and scored a total of 8 goals during his time for the Azzurri blues.

Bonucci is also one of the highest-paid footballers in Serie A, with a current weekly salary of £210,000 at Juventus. In 2014, towards his early days at Juventus, Bonucci was earning £50,000 per week, which then increased each year.

In 2018, whilst at AC Milan for one season, Bonucci earned an estimated £230,000 per week without endorsement or sponsorship deals.

Although he is now 34 years old, Leonardo still may have a few more impactful seasons in the Seria A, playing in their slower-paced league for more years to come.

Though it is not documented that Bonucci officially holds a contract with sporting brand Nike, but he often wears their boots during his games and training practice. We believe he may be on their books as a sponsor, but it isn’t 100% confirmed what deal he is receiving.

Bonucci donated a worn customised pair of Nike Hypervenom Phantom III Elite boots to a charity auction in 2020. The signed and personalised boots were in aid of The Italian Association for Cancer Research auction that collected just over €1,000 for the charity.

On June 18, 2011, Bonucci married Martina Maccari, a former model and blogger he met through a mutual friend in 2008. They have two sons, Lorenzo and Matteo, and a daughter, Matilda. Although Bonucci spent several seasons with Juventus, his eldest son, Lorenzo, supports Juventus’ cross-city rivals, Torino.

Matteo Bonucci, Bonucci’s youngest son, underwent emergency surgery in July 2016 after suffering from a severe illness. In a 2017 interview with El Pas, Bonucci revealed that his son’s illness had even caused him to consider leaving football altogether.

In 2012, Bonucci experienced a similar situation to Lorenzo Insigne, where an armed robber confronted him, demanding he hand over his expensive watch. However, as the robber reached out to take it, Bonucci punched him and chased him down the street, where he escaped with his accomplice on a motorbike. It seems to be quite common in Italy amongst targetted footballers.

Bonucci tested positive for Covid-19 in April 2021, during Italy’s pandemic wave. However, he recovered in a couple of weeks back to his normal active lifestyle.

During the 2011–12 Italian football match-fixing, Bonucci and Juventus teammates Simone Pepe, manager Antonio Conte, and many other players were accused of match-fixing and investigated.

Accused of helping to fix the result of a 3–3 draw against Udinese in May 2010, during his time with Bari, and faced a potential three-and-a-half year ban if found guilty. Bonucci, on the other hand, denied any wrongdoing, and both Pepe and himself were found not guilty in August of that year.

Leonardo Bonucci has an active social media presence online, where he promotes his career highlights and sporting updates to his 5.4 million Instagram followers and 4.4 million Facebook followers.

Like most superstar footballers, Bonucci is a fan of his fast and luxury supercars, arriving at training in many different high-end cars such as Ferrari, Mercedes, Range Rover, Audi A4 and Aston Martin, to name a few.

His notable purchase is his Ferrari F12 Berlinetta, with a price tag of €300,000. This front-mid-engine, rear-wheel-drive grand tourer won the 2013 International Engine of the Year Award in the Best Performance and Best Engine above 4.0-litre categories. A truly magnificent masterpiece.

After concluding from Bonucci’s career moves and wages, we believe that his primary source of income is from football. Our team of analysts believe Leonardo Bonucci’s net worth is an estimated €30 million. However, this is not to be confused with his total past career earnings, as we believe that to be significantly more. Still, spending on a luxury lifestyle and car collection will have taken some damage over the years.

Bonucci still has a few more years of professional football left in his career with a possible extended contract at Juventus. Who knows, he may even look into more endorsement deals toward the final stage of his football career for a nice retirement cushion.

Faiq Bolkiah Net Worth & Career: Richest Footballer In The World