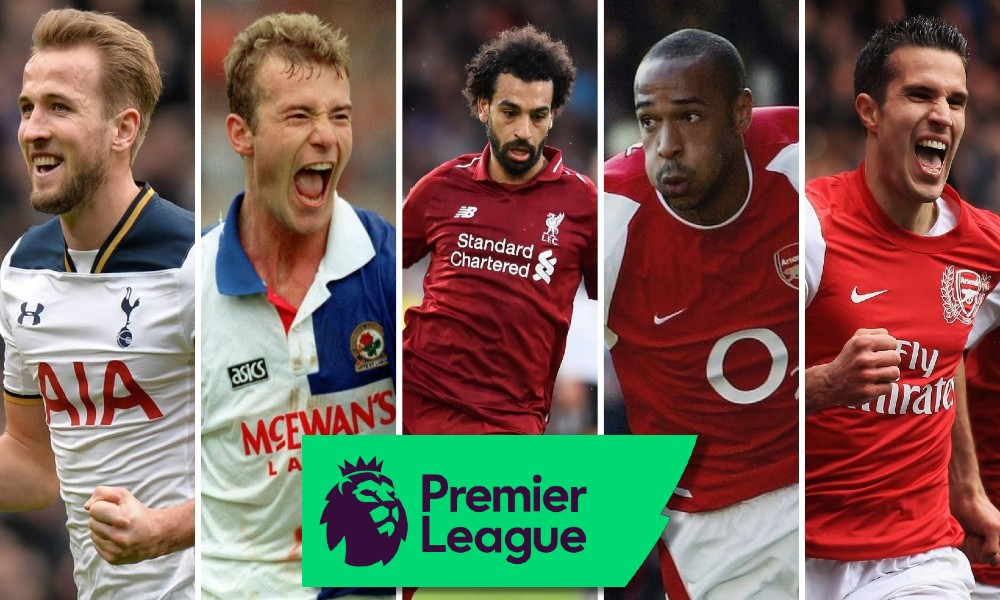 The Premier League revolutionised England’s football landscape and made English clubs household names around the globe. Since the competition’s inception in 1992, it has been blessed by a number of prolific goalscorers. In this piece, we will look at the players who have scored the most goals in a Premier League season.

We have also considered Andy Cole and Alan Shearer for their 34-goal hauls in 1993/94 and 1994/95, respectively. In its first three seasons, the Premier League was a 22-team affair rather than the 20-side spectacle it is today. For this reason, many disregard Cole and Shearer’s pre-95/96 achievements while talking about players who scored the most goals in a Premier League season.

But, we wanted to make an all-inclusive list, so you will read about Cole and Shearer’s heroics in the coming sections. So, let’s find out which players had such tremendous scoring pedigrees to make it to this list of elites.

Newcastle United brought in Andy Cole for a club-record fee of ￡1.75 million when the Toons played in Division One. Cole scored 12 goals in 12 matches to lead Newcastle to the Premier League.

Despite playing in a superior league, Cole’s scoring prowess remained uncompromised. He hit 34 goals in 40 outings this time around and spearheaded the Toons to a remarkable third-place finish. In doing so, Newcastle returned to the UEFA Cup for the first time in 17 years.

Cole’s first goal that season came against Manchester United, a club he would join two years later, at Old Trafford in a one-all stalemate. Three months after that match, the St James park audience relished an Andy Cole hat-trick as Newcastle thrashed Liverpool 3-0.

It wasn’t the only time Cole took the match ball home that season. He picked up another hat-trick against Coventry City in February 1994. Cole couldn’t break Hughie Gallacher’s record of scoring 36 league goals, but he did achieve 41 goals in all competitions to dethrone him as Newcastle’s highest goalscorer in a single season.

Alan Shearer’s name has become so synonymous with Newcastle United that many tend to forget he had an incredibly successful career at Blackburn Rovers. In fact, it was at the Lancashire club where he won his solitary Premier League medal.

Shearer had shown glimpses of a brighter future during his early years at Southampton, but he must have been taken aback to hear that Blackburn Rovers had offered ￡3.6 million to the Saints for his services. At that time, it was a record fee in English football.

Manchester United manager Sir Alex Ferguson was eager to bring Shearer to the fold, but he couldn’t better the offer the Rovers put on the table. The club’s owner Jack Walker was adamant about sparing no expense to bring the Newcastle native to Ewood Park.

After missing most of his first season because of an ACL injury, Shearer returned the faith put on him the next season. In 1993/94, he scored 31 from 40 matches to make Blackburn Rovers the Premier League runner-ups. In 94/95, he had 34 goals to his name as Blackburn Rovers revelled, becoming the champions of England.

When Liverpool landed Mohamed Salah in the summer window of 2017, there wasn’t a sense of euphoria among the fans. Salah, who came from Roma for a ￡34 million transfer fee, was seen as a quality addition to Jurgen Klopp’s team, but nothing special.

The Egyptian went on to prove everyone wrong. In his first season at Anfield, Salah scored a whopping 32 Premier League goals. No other player, not even the mercurial Cristiano Ronaldo, managed to score more after the league moved a 20-team format in 1995.

Salah would go on to win the Premier League and Champions League with Liverpool in subsequent seasons. But, his first season at the club was solely focused on individual brilliance. He scored against 17 different oppositions that season. Only Ian Wright and Robin Van Persie managed to do that in a single Premier League season.

Luis Suarez is a colourful character who seems to have a penchant for controversy. But if you judge him solely on football skills, you would have to admit he’s one of the best strikers of his generation.

So, it doesn’t come as a surprise that the enigmatic Uruguayan is one of the players with the most goals in a Premier League season. In the 2013/14 season, Suarez was unstoppable.

Apart from scoring 31 goals in only 33 appearances, he also provided 17 assists for his teammates. Suarez’s ruthless form took Brendan Rodger’s on the verge of Premier League glory, but they narrowly missed out in the end.

Cristiano Ronaldo is a man who needs no introduction. The Portugal international has won the Champions League four times and also has five Ballon d’Or crests to his name. Even in his mid-thirties, Ronaldo continues to score goals for fun.

Ronaldo’s ascendancy to superstardom began at Manchester United. Sir Alex Ferguson spotted him in a friendly match against Sporting Lisbon. Convinced by his performance, Ferguson decided to bring him to Old Trafford, and the rest is history.

In the 2007/08 season, Manchester United won the Champions League and the Premier League. Unsurprisingly, Ronaldo was central to their success. The forward bagged 31 goals in the Premier League that season and ended up winning his first Ballon.

Alan Shearer has had two more seasons thirty plus goal seasons with Blackburn Rovers, which brings him back to the discussion. In his first fully fit season at Blackburn Rovers, he returned 31 goals in 40 matches. But Andy Cole scored 34 goals the same season to beat him in the Golden Boot race.

Shearer’s 95/96 campaign was more impressive, considering the league was then trimmed to a 38-match format. Shearer, who is still Premier League’s all-time leading goalscorer, hit the 31-goal milestone again for the Rovers. But, this time, he played only 35 matches to do so. Unfortunately, Shearer’s goalscoring flair wasn’t enough to defend Blackburn’s title.

In 2017/18, Mohamed Salah was playing on a whole other level. The Liverpool ace made a mark in his debut Premier League season, scoring 32 goals. So, Harry Kane couldn’t lay his hands on the Golden Boot despite having 30 goals under his belt.

But that doesn’t take away anything from the marvellous Kane was coming off of. He broke Teddy Sheringham’s record to become Tottenham’s top scorer in the Premier League era and reached the 100 Premier League goal milestone as the fourth-youngest player.

Who is the best striker in the Premier League era? The most popular answer to that question would be Thierry Henry. The Frenchman enjoyed incredible success during his eight-year stay at Arsenal.

Henry has won the Premier League Golden Boot four times between 2002 and 2006. No other player has matched that feat. He also won the European Golden Boot twice. However, what puts him alongside the players with the most goals in a Premier League season is the 2003/04 season.

Arsenal made history in 2004 as they went the entire season unbeaten to win the Premier League. Henry contributed 30 goals in that glorious campaign and scored nine more in other competitions to finish the season with a tally of 39 goals.

Robin van Persie is not a universally liked figure among the Arsenal faithful because of his infamous move to rivals Manchester United. Right before that controversial transfer, however, the Dutchman had the most successful season in front of the goal for Arsenal.

Persie bagged 30 goals in 2010/11, including crucial goals in the North London Derby and away wins at Liverpool and Chelsea. He also clocked the fastest goal of the Premier League season after opening the scoring against Sunderland in 28 seconds.

Kevin Phillips played a vital role in Sunderland’s promotion to the Premier League in the 1999/00 season. The former Watford striker had scored 23 goals in 26 appearances to steer the Black Cats to the topmost echelon of English football.

But, almost nobody expected Phillips to carry on his form to the Premier League. Pundit Rodney Marsh had forecasted Phillips would finish the season with five or six goals. Little did he know that he was setting himself up for a giant humiliation.

Phillips surpassed the six-goal landmark within a month of Premier League action. After the end of the season, the striker collected the Premier League Golden Boot and the European Golden Boot, thanks to his 30-goal spoils.

Undoubtedly, there will be more players in the future who will make it into this list. But, that won’t undermine the incredible feats achieved by the players already in the record books for scoring the most goals in a Premier League season.

Faiq Bolkiah Net Worth & Career: Richest Footballer In The World