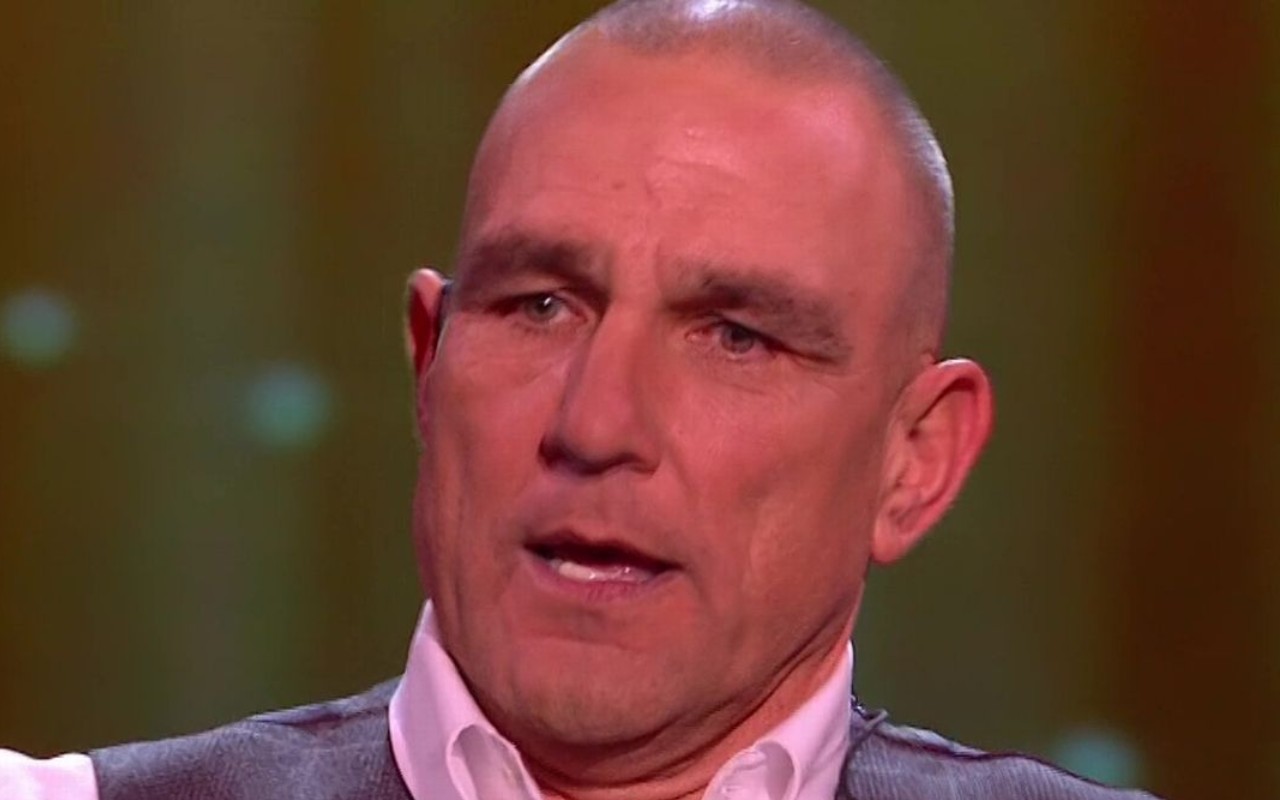 Vinnie Jones is a man of many talents. From a member of Wimbledon FC’s fabled ‘’Crazy Gang,’’ he has become a regular face on the silver screen. In today’s piece, we will have a detailed look at Vinnie Jones net worth and give you an overview of the life of the former Wales international turn movie star.

How Much Is Vinnie Jones Worth?

Vinnie Jones spent 15 years of his life as a professional football player before entering the world of cinema. He started his football journey with non-league club Wealdstone in 1986, but he gained prominence playing for Wimbledon, where he joined two years later. He was a part of the iconic team that won the 1988 FA Cup. Jones was making ￡1,800-a week at that time.

Jones earned his name as a rough and tough midfielder during his playing days at Wealdstone, which prompted Wimbledon to pay ￡10,000 for his services. Before joining The Dons, Jones used to work part-time in construction sites. In 1989, Leeds United, who were playing at Second Division, offered ￡650,000 to Wimbledon for bringing Jones at Elland Road.

Vinnie Jones’s worth as a footballer rose, but he chose to step a division below and join Leeds United. Even though United did not reveal the salary sheet publicly, we found out through private tax returns that Vinnie was earning ￡2,500 weekly. He played an instrumental role in Leeds securing the Second Division title, but he left the Yorkshire outfit after his first season.

He then played for Sheffield United and Chelsea in subsequent seasons before returning to Wimbledon, where he stayed for six years between 1992 and 1998. He transferred to Queens Park Rangers in 1998, where he spent his final season as a footballer. Afterward, he made a career jump to the world of entertainment.

The lion’s share of Vinnie Jones wealth has come from his acting career. He has featured in a handful of successful Hollywood flicks and TV projects. Currently, he draws an average annual revenue of $1.63 million. Vinnie Jones net worth in 2021 is approximately $25 million. We are confident Vinnie Jones wealth will increase even more in the coming years.

Vinnie Jones and Paul Gascoigne gave birth to one of the most famous photos in football history when the duo met in the First Division match between Wimbledon and Newcastle United on February 6, 1988, Plough Lane. Bobby Gould assigned Jones to man-mark Gascoigne, and the Welshman was doing a pretty good job of it.

As the game progressed, Gascoigne continued to get more and more frustrated by the lack of opportunity. After an unsuccessful attempt to win the ball from a Newcastle free-kick, Gascoigne taunted Jones saying, ‘You’re earning your £100 today.’ In response, Jones grabbed Gascoigne’s testicles and held on to them until it brought water to his eyes.

Photographer Monte Fresco immortalised the moment with his snap. Fresco noticed the duo exchanging insults earlier in the game and anticipated the two of them falling out at some point in the game. His predictions turned out to be true, and his foresight was rewarded with an iconic photograph.

Paul Gascoigne and Vinnie Jones have left their days of rivalry far behind. The two are now best of friends and often playfully revisit the event. At a public event in Ipswich in 2019, Gascoigne and Jones recreated that famous moment and posed for a photograph. Vinnie Jones also owns an oil painting of the incident.

Jones’s first film appearance came before he hung up his boots. In 1998, Guy Ritchie cast him in his crime-comedy Lock, Stock, and Two Smoking Barrels. Jones’s first big-screen performance gained great critical acclaim as he took home the Empire Award for Newcomer. Ritchie signed him up for his next film, Snatch, and Jones put in a good show again.

Snatch came out in the year 2000, and to this day, critics applaud the film as one of Ritchie’s best films. Jone featured in another 2000 release entitled Gone In 60 Seconds, where he worked alongside Hollywood heavyweights like Nicholas Cage and Angelina Jolie. Dominic Cena, who directed the movie, was impressed with Jones’s acting.

Therefore, Cena handed him a role in his 2001 film Swordfish. This time, Vinnie Jones had the opportunity to have Hollywood A-listers Hugh Jackman and Halle Berry as his colleagues. He landed the first leading role of his career that year when he signed up to play Danny Meehan in Barry Skolnick-directed sports comedy Mean Machine.

Vinnie Jones took his ‘’hardman’’ personality as a footballer and utilised it to paint a rugged image of himself in front of the camera. In doing so, he became a popular choice for playing the role of gangsters, criminals, and other belligerent characters. He has also worked as a voice actor in Madagascar 3 and Garfield: A Tail Of Two Kitties.

Here is a list of the films he has worked in:

Vinnie Jones lives in Los Angeles, but his getaway place is his cottage in Sussex. He also attempted to buy a mansion with 300 acres of real estate in the area worth ￡5 million. But, he lost out to an unnamed businessman. The Snatch star spends his holidays in his Sussex cottage and also spent the lockdown there.

Vinnie Jones LA home was put up on the market in 2017, and he managed to sell it for $2m. He had bought it in 2007 for $1.56 million. The house sits on 3500 square feet of space, including four bedrooms and four bathrooms. A beautiful pool adorns the garden, which also has a dining arrangement and outdoor heating system.

Jones bought a new home in Los Angeles just 15 minutes away from his old one. We don’t know much about the new Vinnie Jones home as the star went more private after the demise of his wife, Tanya Jones, in 2019. Ever since she passed away, Vinnie has spent most of his free time in Sussex rather than his new LA pad.

Vinnie Jones endorses the South Korean automobile brand, Ssang Yong. In 2020, he appeared on a 30-second TV spot to show off the brand new Ssang Yong Korando SUV. Other than Ssang Yong cars, Vinnie Jones loves to drive his vintage Land Rover Defender 110. He paid a whopping ￡7000 to have it restored.

He also drives a more modern Range Rover model-the Range Rover Sport P400E. He bought it for ￡84,400. The car features a hybrid engine that can reach a top speed of 137 miles per hour. It is the car you would see him drive regularly. Moreover, he has several other vintage cars in his garage, including a 1988 Rolls-Royce Silver Cup.

In 2002, Vinnie Jones released a soul album named ‘’Respect.’’ The feel-good numbers of the album contrasted with his rough and tough persona. His rendition of Jim Croce’s famous track ‘’Bad, Bad, Leroy Brown’’ received a good deal of backlash from fans of the original song. He also took part in 2019’s X-Factor: Celebrity on ITV.

However, the audience response to his version of (I’ve Had) The Time of My Life was vastly negative. But, judge Simon Cowell sparked controversy when he eliminated Glee star Kevin McHale instead of the former Wimbledon midfielder. This decision sparked further outrage online and Vinnie himself pleaded to be omitted from the show.

In 2002, when Jones’s acting career had just taken off, he appeared on the music video of the Westlife song Bop Bop Baby. Vinnie Jones had portrayed the villainous Duke in the video who wanted to marry a beautiful girl played by Leah Wood forcefully. By the end of 2020, the video received more than 15 million views on YouTube.

Vinnie Jones was also set to collaborate with the Irish band for a Christmas song that year. He was supposed to cover Sly, and the Family Stone’s 1970’s hit Dance to the Music. But, the recording never went through because of scheduling conflicts. In 2020, he released two indie singles named Cold Heart and Inner Fight.

After enjoying big-screen success, Vinnie Jones brought his acting skills to the television. A handful of TV advertisements for alcoholic brand Bacardi marked his TV emergence. Vinnie Jones did have prior experience before delving into the world of TV. However, it’s unlikely that he would have fond memories of his involvement with Soccer’s Hard Men.

The 1992 documentary highlighted the physical aggressiveness of players like Graeme Souness, Steve McMahon, Billy Bremmer, etc. Jones, who had a reputation for being violent on the field himself, narrated the documentary. The FA accused Vinny Jones of glorifying foul play and fined him ￡20,000.

Vinnie Jones had played the recurring role of Karl Stromberg in NBC’s spy-thriller show Chuck for three seasons. He made guest appearances in shows like Elementary, Arrow, and NCIS: Los Angeles. He has hosted multiple shows, including Vinnie Jones’ Toughest Cops and Police Interceptors.

In 2015, Vinnie Jones featured in ABC’s musical Galavant. This was a departure from the characteristics of a typical Vinnie Jones character. His attempt at diversifying his portfolio was short-lived as the show got cancelled after its first season. Regardless, Jones got plaudits for trying to expand his acting range.

Vinnie Jones is not a vegan, but he has expressed his fascination for the vegan lifestyle multiple times. In 2019, he called out British journalist and media personality Pears Morgan for his anti-vegan comments. The following year he told Mirror that he believes veganism is a healthy life choice and a plant-based diet can substantially benefit the environment.

He teamed up with pop star Pixie Lott and boxer Nicola Adams for endorsing Alpro-a Belgian company that produces non-organic food, including dairy products. The three of them took part in a commercial that spoofs a popular dairy campaign from 2010-’Make Milk Mine’. However, he didn’t make any commitment yet to turn vegan himself.

As a footballer, Vinnie Jones might not have been the most successful names in history, but he has a legacy he can take pride in. He never won a league title, but he stood witness to one of the biggest upsets in English football. After retirement, Vinnie Jones net worth continued to soar as he built a remarkable acting career in the British and American cinema industry.