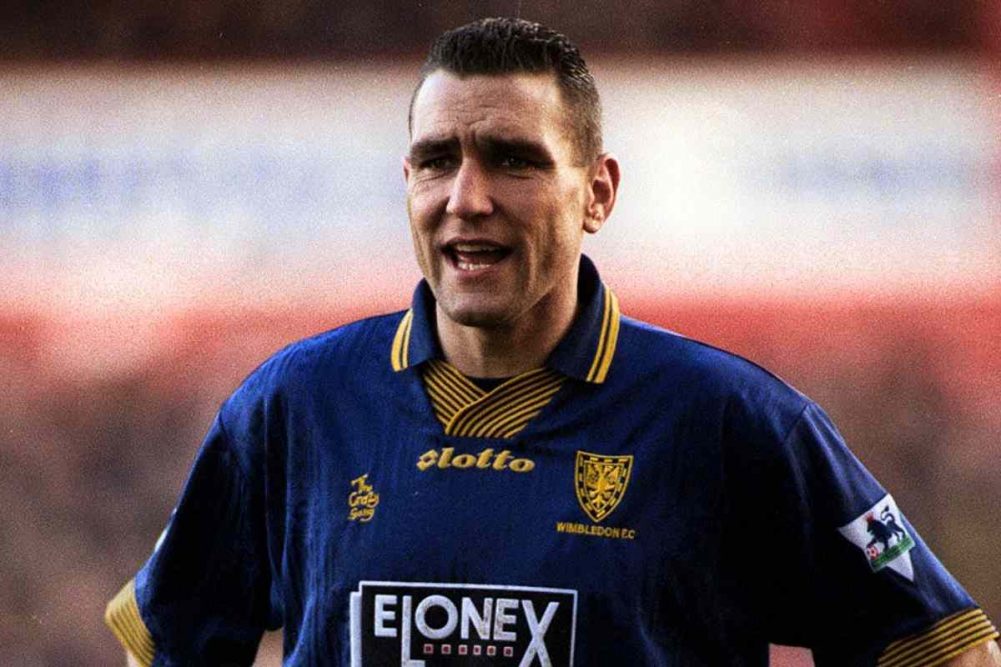 Modern fans of football and film may not realise it, but former 1980s and 1990s hardman Vinnie Jones was quiet the accomplished player. At least, sort of.

Today, it is easy to dismiss Vinnie Jones football career as nothing more than a psychopath running around in short shorts, hacking opponents to the floor with dangerous tackles.

Yet, Jones, who appeared in 520 career matches, scoring 39 goals, was so much more.

Just as he was more than the fouls he committed; the midfielder was more than just a part of Wimbledon’s famed Crazy Gang. He played just three seasons in his first spell in the First Division with Wimbledon, yet the Crazy Gang seems to dominate most discussions about the Vinnie Jones’ football brand of play

Since hanging up the boots, Jones has appeared in a litany of films. After his role in Guy Ritchie’s London gangster film, Lock, Stock, and Two Smoking Barrels, in 1998, Jones has been typed cast into playing a number of parts as a thug. For many football fans, it isn’t a role too different than what they saw on the pitch for nearly two decades.

While he came through the game in non-league football, first signing with Wealdstone. He played matches on the weekends when not working his day job on construction sites as a labourer.

It was at the non-league club that he got his feet wet in 1984. The club signed Jones after coaches watched him play for a local team. Just 19-years-old, Jones already had an imposing frame at nearly 6ft 1in tall. His height made him a dominant figure on the pitch.

Jones’ play at Wealdstone caught the eye of First Division club Wimbledon shortly after a spell in Sweden’s third tier. It was a time when a top-flight club still scoured the lower reaches of football seeking out potential first-team players. Vinnie Jones’ football style caught the eyes of the Wimbledon coaches and £10,000 secured his name.

It was at Wimbledon that Jones’ hardman persona truly came out. Unlike some footballers, he never faked his toughness and the snarl on his face was always genuine.

Jones worked for everything he achieved on the pitch at a time before million-pound contracts were handed out before a player turns 18. His personality gelled perfectly with Wimbledon’s squad. Every man on the roster had a chip on their shoulder.

In the context of ice hockey, Jones was a ‘goon’, a player sent out onto the pitch to intimidate and rough up the opposition. It worked and helped Wimbledon defeat Liverpool in one of the most famous FA Cup Finals in 1988. Wimbledon shocked Liverpool and nearly 100,000 fans at Old Wembley Stadium, winning 1-0.

The game was the perfect example of Vinnie Jones’ football career. It was a match he – and his teammates – simply wanted to win more than their opponents.

Cold War-era 1980s gave way to neon coloured 1990s and Jones, seeking a new challenge, moved to Leeds United. He won another piece of Silverware at Elland Road, helping the side win the Second Division in 1989.

Short stints at Sheffield United, Chelsea, and a return to Wimbledon followed. An ill-fated role as player-coach at Queens Park Rangers in 1998-99 was the end of his playing career.

The most ridiculous tackles that players cannot get away with today

His football career ended in 1999 and truth be told, he may have been a forgotten figure had it not been for a film career. The midfielder was never known on the pitch for his silky passing or his finishing.

Rather, it was his tackles and forceful barging about on the football pitch that caught the eye. Today, Jones is looked back on fondly by fans young and old. At least fans that weren’t supporters of his clubs’ rivals.

There is a nostalgia in his’ tactics, persona, and tackles, as players cannot get away with those some antics in modern football. Perhaps Jones’ most famous, or infamous, the moment came in February 1988 when he grabbed Tottenham Hotspur player Paul Gascoigne by the testicles during a game. The image is famous as a grim-faced Jones reaches back and grabs a handful of Gascoigne family jewels.

According to Gascoigne, prior to the incident in the tunnel pre-match, Jones uttered the iconic line, “It’s just you and me today, fatty. I ain’t playing football — and neither are you.”

The testicular grab on Gascoigne may be a famous moment, but it was Jones’ hard tackles that often grabbed headlines. His over the top tackle on Liverpool’s Steve McMahon in the 1988 FA Cup Final was a perfect example of what players cannot do today.

Attacking players now have far more protection and a reducer, like the one given to McMahon, is a certain yellow card. For Jones, it wasn’t even a telling off.

Months after laying into McMahon, Jones ended the career of Tottenham Hotspur defender Gary Stevens with an ill-advised tackle. Wimbledon teammate John Fashanu had Stevens tied up with a tackle when Jones barreled in with a challenge. Stevens never fully recovered from the knee injury he sustained and retired a few years later.

Perhaps Jones’ most ludicrous tackle and one that would see a player sent off in the modern game came in 1994. In his second stint with Wimbledon, Jones flew into Manchester United star Eric Cantona with a two-footed dropkick. As per usual, he made no attempt to play the ball, just the opposing player’s leg.

Vinnie Jones played in a football world that will never return. It was a time when attempted murder on the football pitches of England was dismissed as boys being boys.

Jones played in the Premier League from 1992 to 1998 after it replaced the First Division as England’s top flight. Throughout his career, Jones was sent off a total of 12 times. Jones has been retired for over two decades but is still tied for second for the most Premier League red cards (seven).

While playing for Chelsea, Jones set the record for the fastest yellow card received in a Premier League game. Jones’ tackle on Sheffield United’s Dana Whitehouse earned him a yellow card after just three seconds.
Jones is honest about his role as a footballer.

He intimidated opposing players, made hard tackles, and geed up teammates and fans. The midfielder only scored 39 career goals in 520 career matches.

The former Crazy Gang member transitioned from being a hardman on the pitch to be one on the silver screen. Jones has appeared in over 70 films, typically playing the same hard grafter he was on the football pitch. He remains regular in films ranging from big-budget Hollywood productions to indie pics.

Over 30 years since making his debut at 19-years old for non-league Wealdstone, it is remarkable how Vinnie Jones’ football career transformed him into an unlikely anti-hero of football.