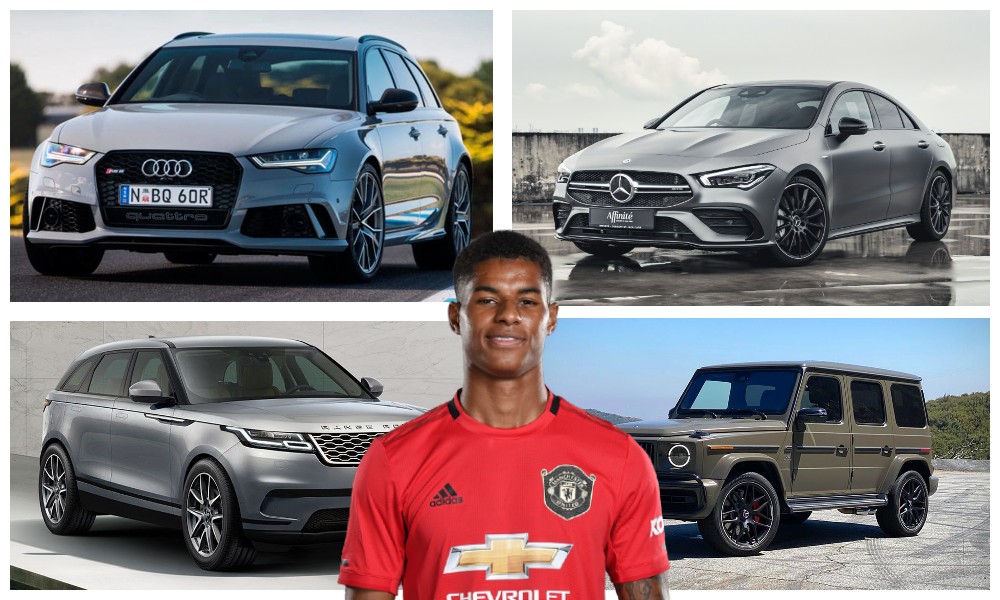 Marcus Rashford has been a headline magnet for his football pitch heroics, outstanding community work, and of course, for being honoured as an MBE. What has slipped under the radar is his fascination for automobiles. This article will show you Marcus Rashford’s car collection that will impress any car enthusiast.

The first Marcus Rashford car we have in our record is the Audi RS4 Avant he bought after signing his first professional contract. The car set him off about ￡39,000, which was almost worth two weeks of his salary back then.

This car was the last Audi car that used 4.2 FSI V8 engines. Thanks to this naturally aspirated engine, you can get 444 Brake Horse Power, which is rather impressive for an estate car. The station wagon has a unique look that combines subtlety and intimidation. It’s 20mm lower than standard A4 estate cars, which gives it a sportscar vibe.

You can hit 60mph within 4.7 seconds, and if you really decide to give it a go, you can storm the road at 174mph. Again, these are astonishing numbers for an estate car. Audi’s ingenious four-wheel Quattro technology delivers optimal to each of the wheels for ensuring a smooth and comfy ride on all terrains.

Actually, Marcus Rashford doesn’t own this car anymore. However, this is the car he was driving in 2017 when he suffered a car crash while returning from Manchester United training facility at Carrington. The incident took place just the day before the Red Devil’s Premier League clash with West Ham.

Thankfully, Rashford didn’t sustain any serious injury. He was mentally rattled though, but he did manage to make it to the match squad and came off from the bench in Man United’s 2-0 away win at London Stadium.

Rashford repaired the car later on and sold it.

The 2017 version of Mercedes CLA 45 Coupe comes with a 20HP upgrade over its predecessor and can produce 188HP for every litre consumed. The engine roar measures a whopping 88 decibels, which is quite formidable.

Rashford has a penchant for Mercedes cars, so the CLA 45 was not the only one he had in possession. The England international has driven several cars bearing the iconic Marcedes-Benz logo. The Marcedes S Class Coupe is one of them.

Rashford was seen driving a 2019 Mercedes S Class model. The steering has an elaborate set of control button keys that give you access to multiple entertainment options, telephone, GPS, driving data, etc. If you are not in the mood for pressing buttons, you can switch to voice command mode and tell the car what you want to do. The seats are temperature adjustable.

The impeccable performance of the V8 turbocharged engine justifies the six-figure price tag of this car. It also offers excellent fuel economy, going as far as 31 miles on a single gallon, loaded with high-tech amenities inside. This car promises to make long drives worthwhile.

The Mercedes AMG CG3 saloon is another Mercedes car that has found its way into Marcus Rashford car fleet. The car boasts a phenomenal V8 engine and a majestic exhaust note that will turn the heads of all car lovers. While the S class V8 engine can achieve 0-60mph within 4 seconds, this car takes nanoseconds more.

The C63 puts more than half of its weight on its front axles, but that doesn’t stop the car from making incredible turns at narrow angles. The driver can navigate between six driving modes to boost the driving experience. As you select higher modes, the stability of the steering will increase in tandem with a rise in accelerator sensitivity.

We were surprised to see Marcus Rashford driving the Mercedes GLA 2020 because it’s not a luxury car by any means. It’s a utility four sitter that seems perfect for a suburban family of four. It’s an all-around model that offers a reasonable price and great mileage. But it does seem a bit out of place in a celebrity garage.

It has a modest 1.3L engine with a 161BHP capacity that takes just under ten seconds to reach 60mph from zero, which is not overly impressive compared to other models Rashford has in his collection. It has a top speed of 124mph. It’s a compact and gorgeous SUV, but again, we feel it’s too much of a reserved choice.

The Mercedes C Coupe is also a budget four sitter that Marcus Rashford has at his disposal. Its 1.5L engine offers a remarkable 194BHP output. The car clocks at 0 to 60mph in seven seconds, even though it comes at a budget price, it has some high-end in-cabin offerings that distinguish it from similarly priced vehicles.

Designwise, the Marcedes C Coupe takes after the premium Marcedes S Coupe. It has four driving modes as part of the car’s Airmatic Agility package. Therefore, you can customise your driving sessions to match the demands of varying road conditions. It comes with Marcedes 4MATIC technology to enhance control in difficult driving circumstances.

The highlight of the Range Rover Velar is its outstanding physique and equally stunning interior. This is the first Range Rover version that assigned greater importance to its appearance over its performance. That said, it would be unfair to undermine the engineering prowess Range Rover has shown to build this exclusive set of wheels.

The top-of-the-line air suspension in this vehicle makes it a breeze to drive even on the bumpiest roads. The eight-speed ZF automatic gearbox optimises your driving every time you move to a different gear. The V8 engine underneath its hood has a horsepower threshold of 296. It takes only six seconds to thrust forward at 60mph speed from a standstill position.

The Marcedes AMG G63 is Marcus Rashford’s go-to vehicle for driving to training sessions. He appears to like this model more than his other cars as he regularly takes it out for a spin. Rashford originally paid ￡140,000 for it. ￡10,000 extra went into customisation. He did a custom camouflage paint job on the bonnet.

Marcedes AMG G63 encapsulates the classic SUV design with some modern twists. It has a monster 4L V8 engine that packs 577HP. Also, it has an enormous torque output of 627 pound-feet. The Mercedes AMG G63 can rival some of the best sports cars within the same price bracket in specs.

Marcus Rashford car collection has grown significantly over the last five years. We are pretty sure he will make new inclusions to his armada after securing the next contract of his career.