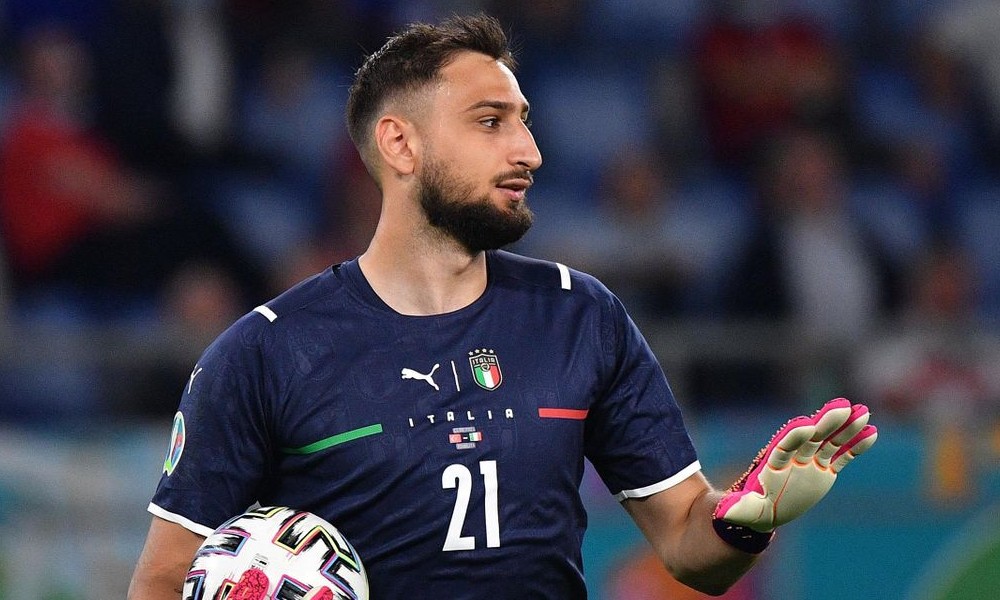 The Naples born young superstar goalkeeper, Gianluigi Donnarumma, is the bright future for Italian goalkeeping. After Buffon’s years of reigning at the top, there would always be a protege to follow in his footsteps. Since recently earning ‘Player Of The Tournament’ at the Euro 2020s and Donnarumma’s big summer signing to French giants PSG. It seems Gianluigi Donnarumma is the new generation of Italian goalkeepers.

In this article, we will look into the life of the young Italian number 1 and understand Gianluigi Donnarumma’s net worth whilst delving into his career history.

Whilst it is not documented how much Gianluigi was earning at the beginning of his AC Milan career. It was reported that Donnarumma was making an estimated €200,000 per week from his 2017 contract at Milan.

In the summer of 2021, Milan refused to meet the demands of Donnarumma’s agent, Mino Raiola’s contract to continue at the side. Which then pressed PSG to sign the young shot-stopper, surpassing Barcelona and Juventus’ interest in the young talent.

Paris Saint-Germain confirmed a five-year contract for Donnarumma. Landing him €12 million per season, plus bonuses and incentives. Making him one of the top paid goalkeepers in the game today.

Donnarumma grew up in the ASD Club Napoli football academy in his hometown of Castellammare di Stabia, where he joined in 2003. At 14, he joined AC Milan for €250,000, where his older brother, Antonio, had previously played.

Before this, he was a member of the Rossoneri youth academy from 2013 to 2015, where he always trained in the age group above him, beginning from the youth and working his way up the ranks, very similar to Fun888, a popular sports gambling website.

In February 2015, three days before his sixteenth birthday, he received his first call-up to the senior team from manager Filippo Inzaghi as a third-choice goalkeeper. However, he did not play in a league match, mainly viewing from the substitute bench. In March 2015, Donnarumma signed his professional contract for a three-year term.

Donnarumma made his competitive debut in Seria A on 25th October, at 16 years and 242 days. The second-youngest goalkeeper to start a match in Italian history.

After three successive victories for Milan with Donnarumma in the starting line-up and a crucial win over Atalanta, he was the key figure to their success. He soon earned respect for the first-team position. That year, his performances also earned him among the top 25 of Don Balón’s ranking of the world’s best footballers under age 21.

By the beginning of 2016, Donnarumma was firmly in Milan’s first choice squad and earned himself a revised three-year contract.

Fast-forward to June 2017, when Donnarumma renewed his contract with Milan until 2021. After certain speculations against his following career path. This came with a lucrative annual salary increase to €6 million under the terms of the contract.

The Euro’s 2020 was a massive boost for the young Italian star, as he earned his International place, superseding the legend Buffon.

Regardless of the pressure, he played a vital role in securing the tournament victory for the Azure blues. As they defeated England in the final, with Donnarumma saving two penalty kicks for the win. His performance throughout the tournament earned him UEFA Player Of The Tournament, the first time a goalkeeper has ever won that award.

Following his huge success from the Euros and his Milan contract coming to an end. Donnarumma was on many big clubs radars.

It didn’t take long for a top club to snap him up, which was French giants Paris Saint-Germain (PSG) that offered him a five-year contract with a whopping €12 million per season.

Donnarumma was noticed wearing Puma gloves and boots throughout his career with Milan, which one would suggest is his leading sponsor. However, there hasn’t been any official announcements of his career sponsors or endorsement deals.

At the beginning of 2020, he randomly switched to Adidas when sporting their gloves and boots at a Seria A game. Nothing has been mentioned whether or not he received an official contract or what deal he has been offered. It’s a bit of a grey area.

We believe since the signing to PSG, Adidas will no doubt have a lucrative deal in writing for the Italian. Offering an endorsement deal with an attractive bonus.

Born on 25th February 1999 and raised in Castellammare di Stabia in Naples. Donnarumma has three siblings, Nunzia, Alfredo and Antonio. Antonio is also a professional goalkeeper. They both spent time together through the Milan youth team system and progressed to the first-team squad.

His favourite football team growing up was Milan, and his childhood idol is Gianluigi Buffon. However, Donnarumma wasn’t always an immediate fan of football. It was until his uncle Ernesto took him to games at Castellammare as a pre-teen was when he would truly admire the sport and develop his passion for playing professionally.

Gianluigi Donnarumma is currently engaged to Alessia Elefante, we believe they have been a couple for a few years. Despite their significant height difference, it appears they are a perfect match enjoying time together whilst being briefly seen out and about in the public eye.

Aside from football, Gianluigi keeps his private life pretty private across his social media platforms, mainly focusing on his football fans. His Instagram page has 3.7million followers, and his Facebook with 1.5million, both highlighting and following his career updates.

The 22-year-old, whose sole income has come from football, doesn’t live a super lavish lifestyle as you would expect for a young superstar. Whilst living in Milan, he was renting a luxury penthouse in the city and is yet to get onto the property ladder. Maybe his move to Paris may change that.

However, his car collection is quite impressive, with his favourite being his black Lamborghini Urus, with a price tag of around €174,000. As well as other luxury cars such as the Alfa Romeo Giulia, Audio S8, and Tesla Model S. Therefore, It Seems Donnarumma spends a lot of his earnings on his motors.

Gianluigi Donnarumma’s net worth has been growing significantly recently. However, goalkeepers have a longer career span in the football game, and just at 22, he is already on a top-tier salary with PSG and not even reaching his career peak yet. As his success continues, he will be a future target to endorsement deals and sponsors.

From his past earnings and current salary, we estimate Gianluigi Donnarumma’s net worth is €20million. With an extensive increase going into Ligue 1 season 2021/22.