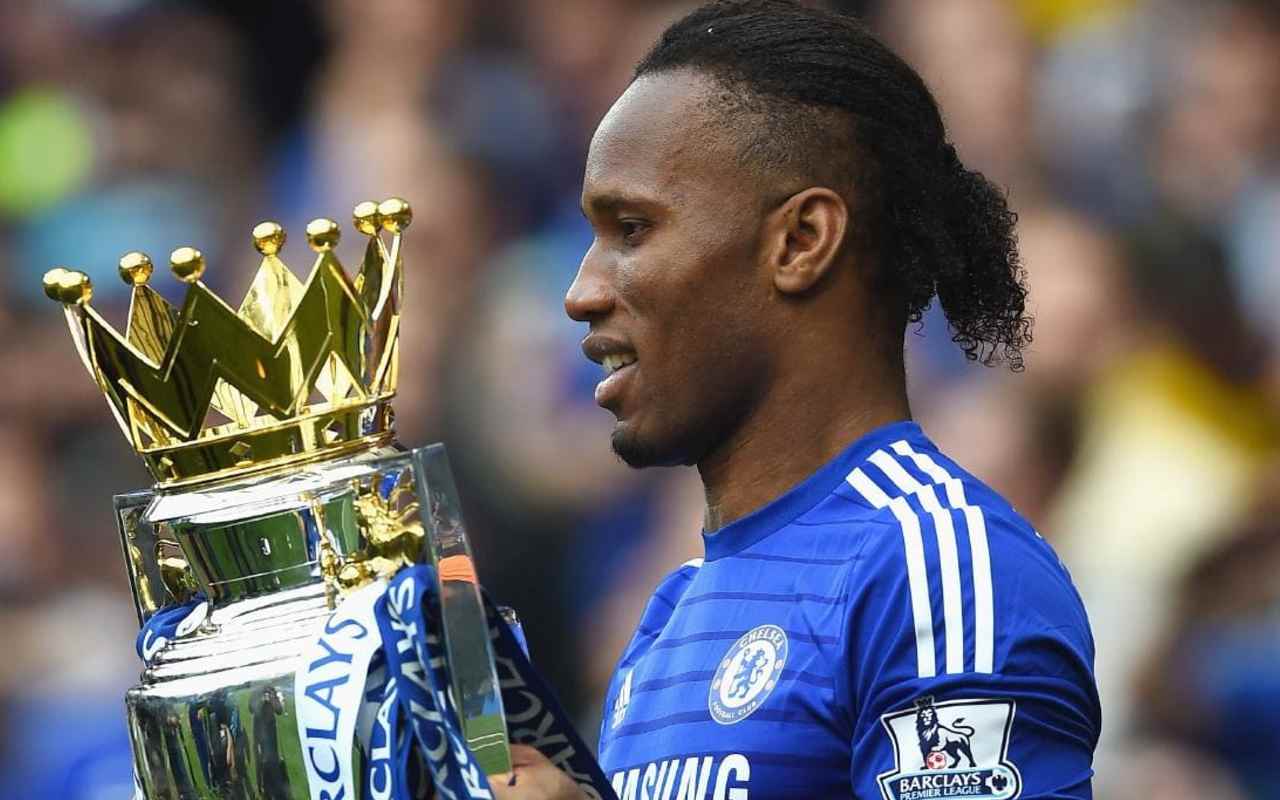 Didier Drogba was a footballer whose influence expanded far beyond the greens of a football pitch. What is Didier Drogba’s net worth now? We will explore the cash and other aspects of his life in this piece.

The marksman did not only spearhead Chelsea’s growth into a European elite during his Stamford Bridge reign but he also remarkably united a nation.

He has won four Premier League trophies and a Champions League title for the Blues. But, even such a trophy-laden honours cabinet does not do justice to his greatness.

Didier Drogba is one of the best footballers the continent of Africa has ever produced. So, it shouldn’t strike anyone as a surprise that he received hefty remunerations for his efforts on the pitch.

At the peak of his Chelsea career, the London club was paying him $15m a year. Even towards the end of his career, he made $3.5m from Montreal Impact during his 18 month MLS stint.

Drogba became the first player-owner in the history of football when he bought minority stakes at USL club Arizona Phoenix. The club is hopeful of securing an MLS expansion slot soon.

Drogba has appeared in advertisements for the likes of Samsung, Konami, Pepsi, Adidas, and Nike. All these endorsement deals also brought in a significant amount of money to his bank account.

The record goalscorer for the Ivory Coast national team also has a 5% stake in an Ivory Coast goldmine.  Besides financial gains, the investment aims to advance infrastructural developments in the nation.

He bought a two storey mansion in Surrey, England in 2009 for $21m. It’s the most expensive real estate owned by any present or former footballers. The house stands over 8600 square feet of land.

Celebrity Net Worth estimates that Didier Drogba’s net worth in 2022 is around $100m.

The story of Didier Drogba starts in Abidjan, Ivory Coast. Didier Yves Drogba was born there on March 11th of 1978. But, he left the country for France when he was only five years old.

Drogba’s uncle Michel Goba used to play in the French second division back then. His parents wanted him to stay with his uncle and grow up there.

However, little Drogba could never settle in there without his parents. So, three years later, he came back home to his father and mother. But, this stay did not last long.

After returning, Drogba would walk to the central park of Abidjan daily to play football. Watching his uncle play football had planted a seed of devotion for the game in his subconscious.

Drogba reunited with his uncle once his parents lost their jobs and had to send him back to France once again. His parents also came over to France in 1991 and the family eventually settled in the Parisian suburbs of Antony.

In the subsequent years, Drogba stepped up his pursuit of football. It no longer stayed as a hobby, he envisioned a future career in it. He signed up for a local youth team and started practising regularly.

Eventually, he caught the eye of Levallois, which opened the doors to semi-professional football for him. He enjoyed a prolific period there, but he couldn’t impress any major clubs before the age of 21.

Drogba was a late bloomer compared to other football superstars of his stature. He penned his first professional contract when he was 21 years old.

Drogba was completing his graduation accounting at the University of Le Mans when the local club approached him with a contract. But, he couldn’t feature regularly for the French second-tier side in his first two seasons.

Drogba was struggling to cope with the intensity of professional football. His former Le Mans coach Mark Westerloppe had claimed it took him four years to get adjusted to the pace of the game.

At that point, no one would have foreseen Drogba making it big as a player. But, he managed to defy the odds and went on to become one of the greatest players of his generation.

That performance was convincing enough for Ligue 1 giants Olympique de Marseilles. They grabbed him next summer for a transfer fee of £3.3m. His 19 goal season for Marseilles got him the ticket to Chelsea.

Marseilles made a huge profit on Drogba since they charged £24m to part ways with him. In the forthcoming years, Drogba proved that he was worth every penny Chelsea paid.

Drogba continued to improve under Jose Mourinho. In 2006/07, he hit 33 goals in all competitions and also landed the Premier League golden boot. Drogba lifted the Champions League trophy with Chelsea in 2012.

In the later stages of his career, he played for Shanghai Shenhua, Galatasaray, Montreal Impact, and Arizona Phoenix. He also had a brief return to Chelsea in between (2014/15).

Didier Drogba captained his nation to its maiden World Cup campaign in 2006. The same year, he had also led the club to the African Cup of Nations final.

Ivory Coast couldn’t progress past the World Cup group stages in 2006. But, Drogba scored the first World Cup goal for his country during Ivory Coast’s 2-1 defeat to Argentina.

But, the luck was not in favour of the Elephants this time as well. They had to play heavyweights Portugal and Brazil in the opening stage and lost both those games. So, the 3-0 win over North Korea was only a consolation.

Drogba played his final World Cup in 2014. He came off the bench to inspire a 2-1 win over Japan. Nonetheless, losing to Colombia and Greece knocked his team out of the group stages once again.

After the tournament, Drogba announced his retirement from international football. He had won 105 caps for his country and found the net 65 times wearing an Ivory Coast shirt.

Didier Drogba had some of Ivory Coast’s best footballing talents of all time as his national team colleague during the 2006 World Cup qualifiers. Kolo Toure, Emmanuel Eboue, and Didier Zokora all played in the same team.

These players had become prominent figures overseas and represented a golden generation of Ivorian football. On October 5, 2005, they found themselves on the verge of making history.

Ivory Coast faced Sudan in their final qualification match. A win over the hosts in Omdurman, Sudan would take them to the promised land that is the World Cup.

The Ivory Coast team finished the game with a 2-1 win. Therefore, they confirmed their participation in the World Cup finals in Germany the next year.

But, the domestic unrest in Ivory Coast somewhat marred the celebration of such an emphatic achievement. At that time, Ivory Coast was going through a civil war and the country was submerged in total chaos.

The tension between President Laurent Gbagbo’s government and a rebel group named The New Forces of Ivory Coast was rising once again. Since 2002, there had been sporadic violence between the two parties.

This conflict effectively divided the country into two factions-the government controlled north and the rebel influenced south. Thousands of lives were lost as the conflict stretched on.

Drogba’s Speech To The Nation

After the historic win against Sudan. The broadcast crew entered the Ivory Coast dressing room to capture their celebratory moments. Drogba took upon this opportunity and addressed his fellow countrymen on the camera.

Here’s what the Chelsea legend had to say-

‘’Men and women of Ivory Coast. From the north, south, centre, and west, we proved today that all Ivorians can coexist and play together with a shared aim – to qualify for the World Cup.’’

‘’We promised you that the celebrations would unite the people – today we beg you on our knees.’’

‘’The one country in Africa with so many riches must not descend into war. Please lay down your weapons and hold elections. We want to have fun, so stop firing your guns.’’

The speech was barely a minute long, but the effect it had was perversely immense. It continued to air at regular intervals on Ivory Coast television networks.

Drogba’s urge for national solidarity proved fruitful later on. Both parties sat at the table for negotiating their terms. Finally, they agreed on signing a ceasefire.

Ever since delivering that inspiring address, which ultimately brought a nation together, speculations had begun to circulate about his future political aspirations.

The rumors got even stronger after his retirement from football. But, he has ruled out making a move to politics and running for the presidency. However, he did express his intention to lead the Ivory Coast Football Federation.

The United Nations Development Programme (UNDP) assigned him as a goodwill ambassador. He donated £3m to fund the construction of a hospital in his native town Abidjan.

In 2010, the Times magazine had enlisted him in their list of the 100 most influential personalities in the world. He shared the list with the likes of iconic sportsmen like Muhammad Ali and Michael Jordan.

Didier Drogba’s net worth is not a competitive benchmark to evaluate the successful career he had. He has snubbed coaching offers from Chelsea, as he sets his eyes to work with Ivory Coast football.