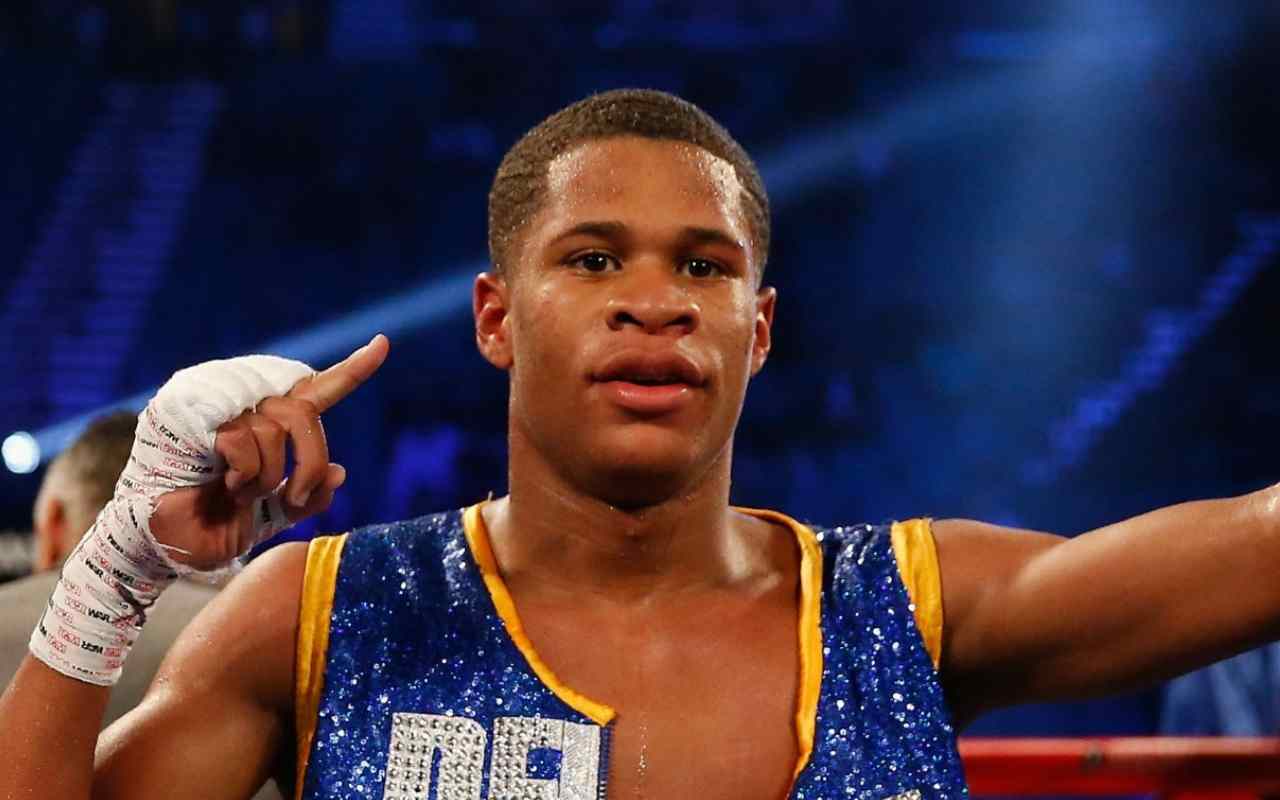 In today’s article, we will highlight Devin Haney’s net worth and his lavish lifestyle outside the ring.

Devin Haney is fresh into his twenties, but he already knows what it feels like to be a world champion.

Haney became the youngest world champion in WBC history when he beat Zaur Abdullaev in 2019 to claim the WBC interim lightweight title. His early success in the ring has earned him comparisons with Floyd Mayweather.

However, Haney’s comparisons with the retired super featherweight legend did not stem from his successful boxing career solely. Their social media stunts are somewhat similar as well.

Mayweather loves showing off his wealth on social media. While Haney is yet to go anywhere near the total career earnings of Mayweather, he loves to remind the world that he is quite rich as well.

During the lockdown, Haney posted a picture of him beside a pile of cash. The caption read “I’d be rather rich than famous.” Many people found this to be an arrogant move, but he does have flaunt-worthy wealth.

So, how rich is Devin Haney? What is Devin Haney salary? We will explore the answers to all these questions down below. So, without further ado, let’s get started.

It only took four years for David Haney to make the career leap from amateur to professional and reach the peak of success. So, it should not come as a surprise that he has made serious money over the years.

Reportedly, Devin Haney net worth of 2021 is around $6m. He has had an invincible career so far, with a steller 24-0 record. The hefty purse money winnings have enabled him to live a posh life.

The Californian started his own company back in 2019. He also signed a contract with DAZN, Eddie Hearn, and Matchroom Sports. As a part of Devin Haney DAZN contract, the 21-year-old will promote its new app.

We will discuss Haney’s DAZN deal in more details later on. As Haney became more and more successful, his purse money winnings have also increased accordingly.

To date, his highest payout was $1m, when he defended his WBC title for the first time. He fought Alfredo Santiago at an undercard event but ended up earning more than the headliners.

The main event was YouTubers KSI and Logan Paul rematch, from which each of the fighters made $900,000. It was the first professional bout between the two, while the first fight was a “white collar” one in Manchester.

In his 21st birthday, Haney’s father and his trainer Bill Haney handed Haney the keys to a Lamborghini Urus. The 641HP beast came with a colossal price tag of $250,000.

Haney is also the face of US sports supplement company SNAC Nutrition. The company also has the likes of Amir Khan, Shawn Porter, Demetrius Andrade on their list of sponsored boxers.

As Devin Haney continued to walk up the stairs of boxing fame, he became more and more of a marketable asset for organisers. This led to a significant rise in his fight purses.

In his early days, he was fighting for purses around $400,000. Nowadays, that amount has more than doubled. He earned six figures in his fight against Alfredo Santiago in 2019.

Haney’s management wanted to set up a $1.5m fight with WBC featherweight champion Garry Russel Jr. But, the latter rejected the offer citing a contract dispute.

Haney would be fighting Yuriorkis Gamboa instead, upon his return to the ring in 2020. Even though the fight purse details are yet to be disclosed, we are confident it won’t match the figure offered to Russel Jr.

Gamboa has some impressive wins under his belt, but he is not at the peak of his career. The former WBA and IBF champion is 38 years old now and nearing the end of his career.

Therefore, with all due respect to Gamboa, he doesn’t hold the same commercial appeal as Garry Russel Jr. at the time. So, Haney will not be enjoying as big of a payday as he did the last time around.

Nonetheless, there has been an undeniable rise in Davin Haney salary lately. His stock will continue to rise if he maintains to stay on his current path of career progression.

Haney took the ring for the first time to defend his WBC title when he faced Alfredo Santiago on KSI vs Logan Paul rematch undercard. And the youngest world champion boxing history didn’t disappoint his fans.

Santiago had tormented Haney earlier in the fight exploiting his height advantage. In the first four rounds, Santiago’s superior reach got him the upper hand.

But, Haney recovered exquisitely in the fifth round and turned the tables. He took control of the fight and ended up winning it. In the end, he banked $1m from the fight.

This fight will always be remembered as the one in which Haney made history becoming a world champion as a 20-year-old. This fight also resulted in a massive payout for him.

Haney gave Abdullaev minimal breathing space as he started to dominate the fight from the beginning. Abdullaev had to leave the ring with a fractured cheekbone after the fourth round.

According to reports, Haney bagged a handsome $800,000 reward for winning the bout and claiming his first world championship belt. Before the Santiago fight, this was the highest amount he received as prize money.

On May 25, 2019, Devin Haney made his DAZN debut as he met Antonio Moran on the ring. Moran had been in the business for seven years, but he was yet to know how defeat feels like.

However, Haney was about to change all that. After a fairly even six-round affair, the San Franciso kid drew the line with a brutal knockout. In our book, that was the best Devin Haney knockout till now.

With the DAZN money coming in, Haney was set to make more money than any of his previous fights. His win over Antonio Moran brought him way over the half a million mark. The exact number is reportedly $650,000.

After months of rumours, DAZN finally got their man in April 2019. The company identified him as a future boxing superstar and his WBC triumph proves that their predictions were right on the money.

DAZN wanted Devin Haney to promote their new mobile app and tap into the US market. The UK streaming giant had struggled to attract American boxing talents in the past, but they made a statement signing Haney.

The exact financial details of the Devin Haney DAZN contract remains under the wraps. But, Haney is thought to be the most expensive boxing acquisition DAZN have on their roster besides Canelo Alvarez of course.

Floyd Mayweather has retired his gloves, but he is eager to pave the way for future African-American boxers to excel at the highest level of the game. Mentoring Devin Haney is testament to his cause.

Devin Haney net worth has increased substantially over the years, but he needs to retain the upward trajectory of his career to cement his place as a boxing elite. The tutelage of Mayweather would be imperative for that.

Haney’s association with the Mayweather family is nothing new though. He had trained under Floyd Mayweather Sr., Roger Mayweather and Jeff Mayweather.

After Ray Mayweather, Mayweather Jr’s uncle and former trainer passed away, Floyd Mayweather Jr. decided to step into the world of boxing training.

Haney is the first professional fighter he took in under his wing. It started video calls during the lockdown, and now the duo often trains together in the gym. However, their relationship is non-contractual until now.

Devin Haney has been living in Las Vegas since he was seven years old after his family moved there from San Francisco. He started to date model and entrepreneur Blac Chyna from 2018.

After they started seeing each other, the 11 year age difference between the two sparked controversy. They broke up a few months later and went their separate ways.

Haney is currently dating Instagram model Big Gigi. They had been together since January 2019. Gigi has a daughter from her previous relationship.

Devin Haney net worth is growing year by year as he enriches his profile as a boxer. Can he become the next Floyd Mayweather Jr.? He is showing all the signs that he can, but he still has a long journey to make.